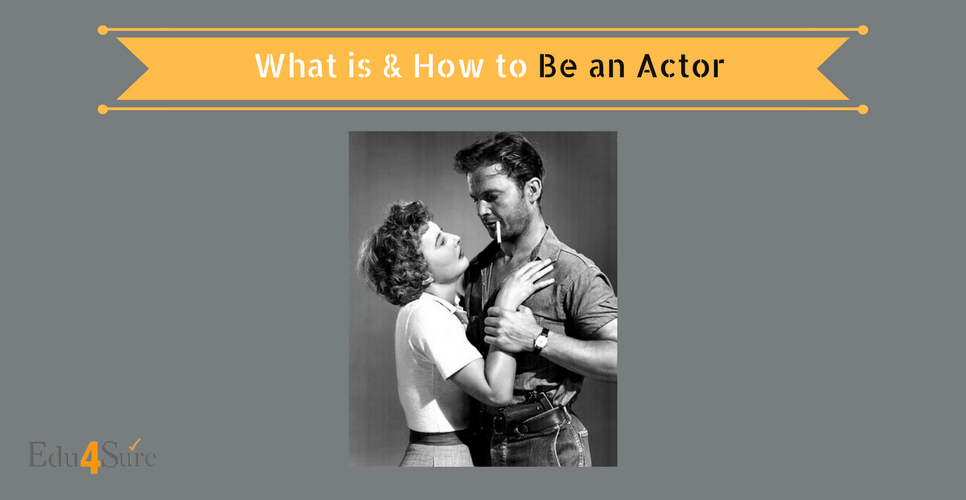 Quickly Jump Out Across Sections
What is Acting?
Who is an Actor?
How to become an Actor?
Top colleges for acting
STEPS To Be Followed

Everyone loves watching movies there is no second thought about it. We all are attracted to the glamorous world of Films. The 70mm screen is the place where we all want to see ourselves one day. Lights, Camera, Action are the three magical words we wish to hear. We all wish to become an actor one day. Let us see how to choose a career as Actor.


Vo FILMY KEEDA HUM SAB KE ANDAR HOTA HAI. Do you just remember dialogues from the movie and take up the DubsMash Challenge?  Did you love to imitate actors and copy their style? Do you have a Photogenic Face and love posing in front of the cameras?  Well, then Acting might be the career that suits you. This blog will help you understand how to choose a career as an Actor?

Career Counselling platforms can guide you to choose a career as an actor. It will also tell whether you are cut out for this acting thing or you are just an entertainer for your friends.

“Acting is not being emotional, but being able to express emotion.” – Robert Quillen

The occupation of performing roles in films or televisions. The art of drama. Presenting a fictional story by way of actions. The telling of a story through enactment. When a person adopts a character and enacts in theater, films, television it is said the person is acting.

Who is an Actor?

The person involved with the profession of acting is known as an Actor. It can male and female both. A female actor is known as Actresses. The actor portrays a character. They act in movies.

We all are familiar with the names of Shah Rukh Khan, Ranbir Kapoor, Salman Khan and add your favorites to the list. All these are actors.

We all go gaga over them. We call ourselves their huge fans. Girls are dying over them. What they do. They just do Acting. It is their Profession as any other profession like a doctor, teacher.

But this publicity, being famous is inherent in the occupation Acting. How can you become an actor?

How to become an Actor?

The journey of being an actor starts from the prospect colleges you can get admission to study Acting.

You can pursue a career in acting even after class 12th if you are passionate about it or after pursuing your graduate. If you plan to take up acting after graduation. Then it is recommended that you complete your graduation in courses like Mass Communication. As the fields have elements common to each other.

STEPS To Be Followed

1. If you feel acting is for you and you have that zeal to become an actor. Start early in your career. Bache Ke Pair Paalne Mein Hi Pta Chal Jaate Hai is the saying you must have heard from your grandmas. While you are still in your college, join dramatics or a modeling society. This will enhance your skills. The future models turn into actors.

2. Now enroll yourself in an acting school. Barry John Acting School is the best. It has been producing actors for over 15 years now and has set the standard for training in acting. It offers a diploma course in acting. The most comprehensive, intensive course.

4. Build a Portfolio. Portfolios are helpful at a time of the auditions. Your portfolio depicts your journey. It includes all the certificates of the places you have worked, studied. Certificates awarded to you. Depicting your work. Build your portfolio as a dancer and actor as that’s in demand. These skills will give you leverage during auditions.

Oh! want to build you career as a dancer?


5. Join a Theatre. In this way, you can work on the craft of acting. You will get opportunities to act on stage plays. Take up similar projects and opportunities where you get a chance to showcase your talent.

6. Move to Mumbai. Mumbai Film Nagri Hai. The city of Bollywood. All the studios, actors, directors are from Mumbai. Move there and settle there. Now start your career. This is the real start of your career. Bahut Saare aate hai Mumbai Star bane, Koi ban jaata hai Koi toot Jaata Hai

7. Approach to directors. You will have a tough time getting your first break. It’s not that easy. Do not fail. Get Up and start. Start from lower levels. Work in advertisements a good way to come into the eyes of directors. You could also work on television shows. Television actors become film actors. There are plenty of examples of Sushant Singh Rajput, Prachi Desai.

8. Keep working hard. Go for several auditions. You don’t know when you hit the jackpot. Approach them frequently. Convince them to take your auditions. This is the way of getting into films.

9. Once you get into the film industry. Survival is Hard. It is the Survival of the fittest. One flop and you are out. So keep working on your skills day by day. Take dance classes, singing classes to develop skills and get an upper hand over your colleagues.

As you grow old in the industry you wear different hats. You can choose a different path and become a producer, learn the art of directors and you give your suggestions. You become synonymous with Bollywood. Slowly and Steadily you master the art and become a successful actor. King of Bollywood as you say.

No one stops here. You wish to grow and become better each day. So you make your way to HollyWood. Bigger, Better and more Glamorous.

Acting is an art. Although you have training sessions to enhance your skill you can’t become an actor until and unless you have it in yourself. There are actors but you still say Usse acting Nahi aati. They are actors maybe by luck or due to godfathers.

So, find your way to choose a career as an actor. Devise your strategy. Believe your art and craft. Luck favors the brave and you will become an actor one day.

What Is & How To Be An Ethical Hacker?