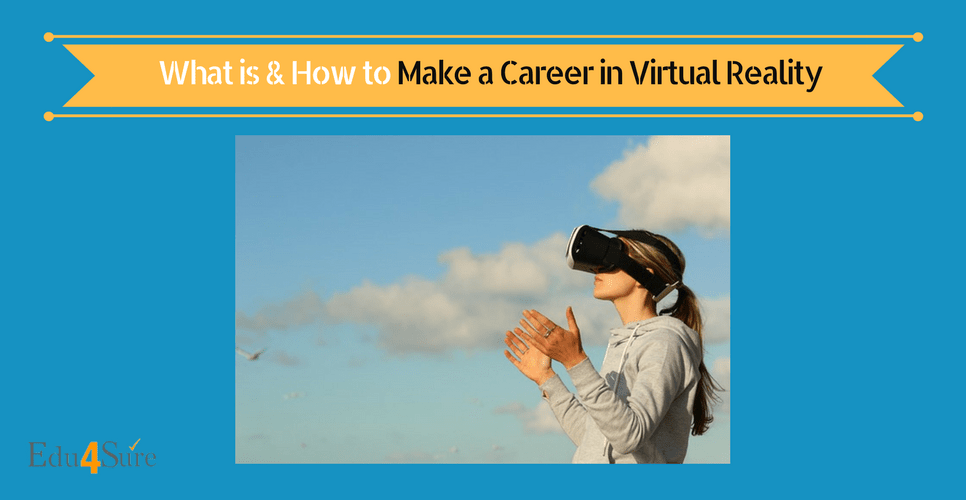 Have you ever fantasized about going to places you have never been or can never go? Places like the galaxy or the moon?. Or maybe to London or Paris but don’t have enough money to plan so?. Well, how about the idea if you can get the feeling of visiting these places sitting at home? Isn’t that amazing?. This blog will help you understand to choose a career in virtual reality.


So the basic idea of virtual reality is this. It creates an environment around you which is not real but you feel you are in a real environment. Have you ever felt in a 3D movie you are becoming or sometimes feeling like the part of the environment? Virtual reality is an extension and enhancement.

But don’t know where to start?.


You have stopped at the right place. This blog will take you through the concepts, applications, and skills required to choose a career in virtual reality.

What is virtual reality?

Virtual reality is a computer-generated simulation of a three-dimensional picture or environment that can interact within a real or physical way by a person using special electronic equipment, such as a helmet with a screen inside or gloves fitted with sensors.

Examples of devices giving an experience of virtual reality

The use of Oculus touch controllers is for the gaming experience. They are a pair of tracked controllers that deliver natural ‘hand presence’ – the feeling that your virtual hands are your own. They work in sync with the Oculus Rift VR headset to give gamers a real experience.

Google Cardboard is a virtual reality (VR) platform for use with a head mount for a smartphone. The viewer places a smartphone into the back of it and views through the lenses in the front.

They are a pair of mixed reality smart glasses that go beyond the screen and blends the digital world blend into the real world.

Aren’t these devices fascinating? I am sure they are so amazing and interesting that it catches the attention of almost everyone who looks at them. And this is just the start of virtual reality. According to experts, there is a lot more to be explored in this field, which is a reason it is one of the most coveted fields for technology lovers and thus a great opportunity to make your career.

Difference between Virtual and Augmented reality

Augmented reality is the amalgamation of virtual reality and actual life as developers can generate images within applications that mix in with contents in the real world. In AR, users interact with virtual things in the real world and can differentiate between the two.

Military: This is useful for training soldiers to fight situations or other dangerous settings where they have to learn how to react correctly. VR is used in flight simulation, battlefield simulation, virtual boot camps and also to provide a safe environment for soldiers suffering from battlefield trauma.

Education: It can present complex data easily to students which are both fun and easy to learn. Also, these students can interact with the objects in that environment to discover more about them. It also enables a large group of students to interact with each other.

Healthcare: VR is used in healthcare as it allows healthcare professionals to learn new skills and refreshing existing ones in a safe environment. Following are examples

Engineering: Virtual reality engineering includes the use of 3D modeling tools and visualization tactics as part of the design. This technology enables engineers to view their projects in 3D and gain a greater understanding of how it works. They can spot any flaws or potential risks before actual implementation. Car manufacturers use virtual reality for prototyping purposes during the design process. This enables them to produce several versions which are then tested and changed as per the results.

Sport: VR is used as a training aid in many sports such as golf, athletics, skiing, cycling, etc. It is used as an aid for measuring athletic performance and analyzing techniques and helps with both of these. It also used in clothing/equipment design and as part of the drive to improve the audience’s experience.

Skills helpful to choose a career in Virtual reality

3D graphics fundamentals: A lot of what you do in VR depends upon the graphics. Thus it is of utmost importance to understand and learn about dimensions, techniques of implementing effective 3D.

Basic Programming: This will be one of the first frontiers of VR. You will need to figure out UI/UX of VR and how to engage the user in a meaningful way that fully utilizes the power of VR. You will thus need to master a 3D engine. Unity is a good starting point, and it uses C# and javascript as its basic language. If you don’t have a background in programming languages, it is highly recommended to learn javascript and then master Unity and use the 3D engine.

Developing interactive apps: Knowledge of how to design and build front-end applications, enhance performance, and also how to work in resource-constrained environments is vital to building apps based on VR experience.

As there are very few designed courses to choose a career in virtual reality, it requires a lot of training for the skills. So while hiring for the job of being in the virtual reality domain, the focus is on the aptitude, learning ability and creativity of the candidate. Eventually, train the employees with the required technical skills.

So now as you know the possible career paths and skills required in Virtual reality, start learning, polish your existing skills and competencies and make a career in the wonderful world of virtual reality. Want to know more about such career choices, read more on Exceptional Careers choices!

Data Science As A Career