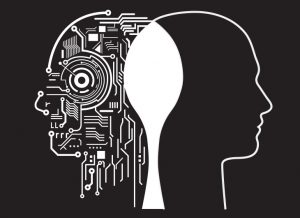 The above image depicts that the confusion between AI and robotics generally arises due to the area that reads “Artificially intelligent robots” (the overlapping portion). However, as is evident there are a lot of areas that are not overlapping as well. You can read more about Robotics on our blog: All You Need To Know About Robotics

To add further perspective, if AI is the brain that “thinks” complex tasks, robot, on the other hand, is the body that “physically” performs that complex task. (This analogy is generally for the overlapping portion of the above Venn diagram and may not be hard and fast).

A robot may or may not necessarily have the power of thinking. However, it is generally believed that if the robot has some sort of thinking capability it generally has a certain degree of Artificial intelligence. This primarily sums up the relation between AI and robotics(on the similarity aspect).

In layman terms, robotics is defined as a machine, programmed to carry out a task or two. They are majorly autonomous or semi-autonomous. That is they can carry the tasks assigned with relative autonomy and with minimal human intervention.

On the other hand, AI is a branch of computer sciences. It requires developing computer programs to perform tasks. Otherwise, it would have needed human intelligence. Problem-solving, understanding language, and logical reasoning are some of the tasks that can be performed through AI.

Difference between Artificial Intelligence and Robotics

More often than not, robots need to have a physical form. Hence robotics as a field generally deals with machines having a physical form. Whereas, since Artificial Intelligence is mostly a program, it does not necessarily need a physical form.
However, this is not to say that robots cannot occur outside a physical form. For instance, the use of basic chatbots on few websites. In short, generally, Robots are hardware whereas AI is software.

Robotics deals with robots that may or may not have the intelligence of their own, whereas Artificial intelligence by the name itself implies intelligence.

AI is a novel and next-generation technology that is much more advanced in comparison to the traditional robotics (robots) technology.

In a way, AI is the integration of machines and intelligence. The design of AI greatly enhances the capabilities of traditional machines.

The general applications of Robots include:

We use robots for basic industrial applications like lifting, welding, handling material, etc.

b) Military and Medicine

Robots are generally used in diverse fields like military and medicine fields. Not to mention, in the military, they can be used to perform robust tasks. Likewise, in a field like medicine, they can be used to conduct minute and precise procedures.
Other applications are in the field of entertainment etc.

General applications of AI are in the field of:

Gaming is another field that widely employs AI technologies. Advanced games like tic-tac-toe, chess, etc. can be enabled through AI.

I Never Knew About Data Analytics Until Spoke To A Counselor

How To Create A Website On WordPress.com Step By Step?

Which Hosting Is The Best?